This is an incredibly striking piece of wearable art created by nature with a little help from Gary B. Wilson (lapidary) and Rosenberg Designs. The Angel Plume Agate (also known as White Plume Agate) will take your breath away.

The angel plume agate comes from somewhere near the Stinking Water Creek in eastern Oregon.

The angel plume agate was cut by Gary B. Wilson, an amazing and talented lapidary in Tucson,  Arizona.

The silver is carved and textured to echo the undulating edge of the material. A spot of colour  is provided by a small carnelian cab. The back of the pendant has been left open so that you can see light through the stone.

The chain is also handmade.

The angel plume agate comes from somewhere near the Stinking Water Creek in eastern Oregon.

This item is currently unavailable. Please contact us for more information. 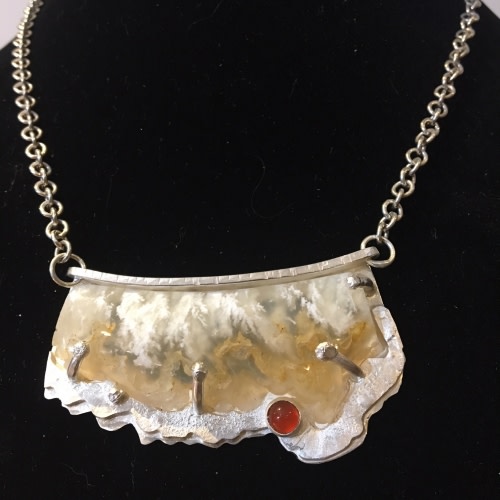