This piece features a small fossil sand dollar set on top of a piece of Olympic Poppy Jasper.  The mottled red, brown and gray coloured stone is found mostly in the form of beach pebbles along the Pacific coast on the Olympic Peninsula in Washington State. Everybody loves sand dollars. Bet you didn’t know they were a flattened form of a sea urchin?

Poppy Jasper is reportedly credited to encourage a deep connection with the earth, as well as enhancing relaxation, organizational abilities, a sense of completeness, protection and the ability to resonate with animals.

Sand dollars have fascinated beachcombers since humans started collecting shells. They first appeared in the oceans about 60 million years ago.

Poppy Jasper is a type of orbicular jasper that is instantly distinct for its psychedelic patterns of red and yellow circles often resembling sea anemones, a miniature version of Jupiter’s Great Red Spot – or, perhaps, the orange, yellow and red flower from which its name is inspired. Poppy Jasper is a form of chalcedony, or translucent variety of quartz.

Price does (not) include chain – Contact me for details 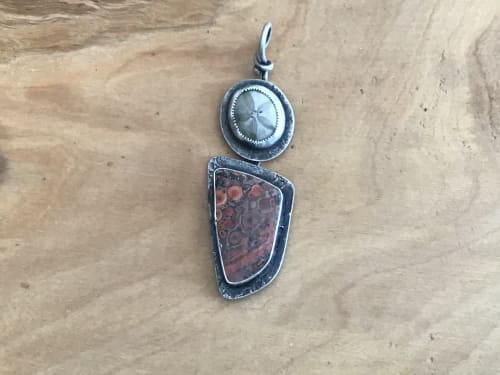