Olympic Poppy Jasper is found mostly in the form of beach pebbles along the Pacific coast on the Olympic Peninsula in Washington State. The top stone in this pendant has a smooth beach pebble feel, while the textured silver surrounding it plays off the mottled surface appearance. The bottom stone is an agate, also found on a beach!

Poppy Jasper is reportedly credited to encourage a deep connection with the earth, as well as enhancing relaxation, organizational abilities, a sense of completeness, protection and the ability to resonate with animals.

Poppy Jasper is a type of orbicular jasper that is instantly distinct for its psychedelic patterns of red and yellow circles often resembling sea anemones, a miniature version of Jupiter’s Great Red Spot – or, perhaps, the orange, yellow and red flower from which its name is inspired. Poppy Jasper is a form of chalcedony, or translucent variety of quartz. 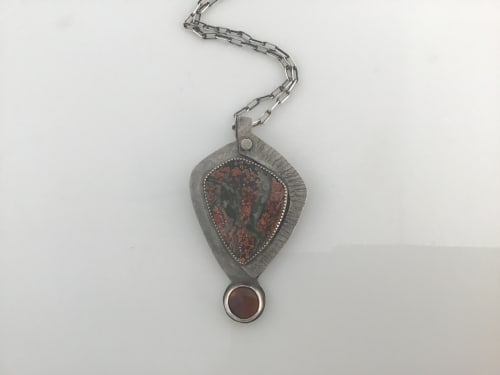